History of Solar in Australia

Australia has had a remarkable impact on the renewable energy industry. Our leaps in research have accelerated the worlds understanding of renewable technology and our sun-soaked country has become the second-highest installations of solar per capita in the world (pvps.org, 2019).

Residential and Commercial solar has been a driving force behind Australia’s transition to renewable energy. Currently, rooftop solar is the largest contributor to solar installation in Australia, currently beating commercial and large-scale solar farms on total capacity (Clean Energy Council, 2020).

But how did we get here? Why did Australia become a global example of Renewable Energy penetration? What made the Australian Solar Industry so big?

These are questions we hope to answer in today's article addressing the history of solar energy, and where WINAICO fits into the ever-changing solar industry.

Solar in Australia is a large contributor to our renewable energy generation. Solar makes up almost a third of power generation in the renewable energy industry last year (Clean Energy Council, 2020). Solar is categorised by the size of the installation, which we adequately name as Small Scale (Residential and Small Commercial rooftop), Medium Scale (Commercial) or Large Scale (Solar Farms). 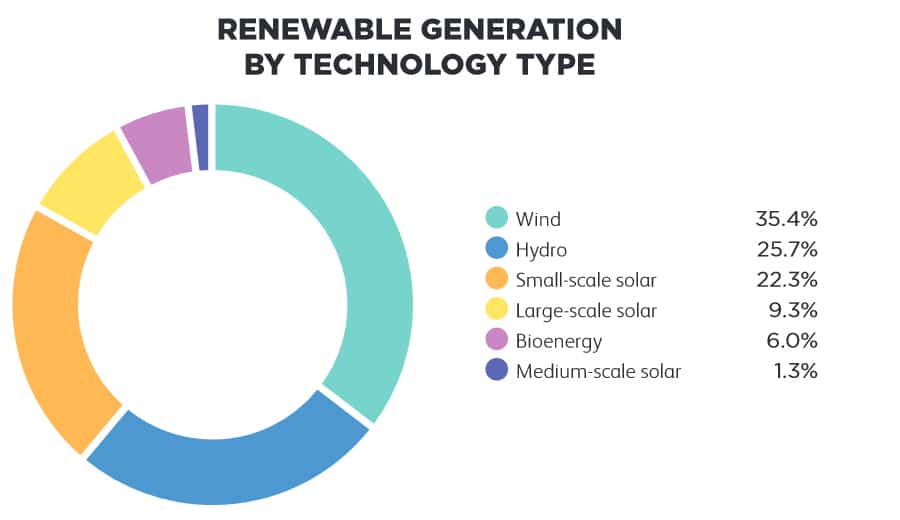 From the image above we can identify that of the 32.3% of Renewable energy generated in Australia is derived from solar. However, Small Scale installations make up the largest proportion of the contribution of  the sector at 22.3% of all power generation. The figures illustrate that homes and small commercial installations contribute up to 70% of the energy generated by solar technology. This proves that households and business are a major component of Australia’s transition to solar and renewable power. But why?

There are two main reasons for the accelerated uptake of solar for Australian households. One was political and the other was industrial.

In 2001, the federal government introduced a policy to generate a certain volume of renewable energy by 2020. The policy known as the Renewable Energy Target had an initial goal of generating 9,500 GWh of Australia’s Energy through a portfolio of Clean Power sources. This proposition was a modest 2% of the expected total energy requirement for that year (CER, 2020).

In 2009, this policy was expanded to 20% of total energy generation sourced from renewable technology. This ambitious target at the time helped develop significant confidence in the sector and guaranteed government support for the next 20 years.

In the Renewable Energy Target was a section designed to advance solar installations for homes and businesses. Formally known as the Small-Scale Renewable Energy Scheme, this enabled solar buyers to overcome the initial financial barrier and increase the value of their systems. By installing solar power households were contributing to renewable penetration in Australia, foregoing other costly generation such as new coal/gas and enabling power generation near consumption which reduced new transmission lines. These all provided a value for the energy industry and the Small-Scale Renewable Energy Scheme was a mechanism that gave financial benefit to those who provided these benefits.

The Small Scale Technology Certificates (or STCs as they are commonly referred to), reflect the financial benefit from producing renewable energy in the eyes of the government and industry. It is a financial calculation to the potential benefit over several years of operation from a solar installation. The larger the installation, the more potential renewable energy and more STCs are generated. To help the deployment of solar, STCs were generated automatically after solar was installed, meaning the owner can receive a single financial benefit that reflects operation over several year at installation. In comparison, large commercial and solar farms generate similar renewable energy certificates (LGCs) as an ongoing basis.

This was considered by the media as a subsidy to the initial cost of solar and lowered the capital cost of installations. At the introduction of this policy, solar installations were low power and high cost which was a difficult economic proposition to sell. The Renewable Energy Target and Small-Scale Technology Certificate scheme helped reduce the capital cost and began the history of the solar industry in Australia.

As solar becomes less of a boutique technology and more commonplace, the prices for solar began to significantly drop. Many of the components in a solar module such as aluminium frames, glass and wiring have not significantly changed since 2000. The main cause for the price drop was the rapidly falling price of solar silicon. 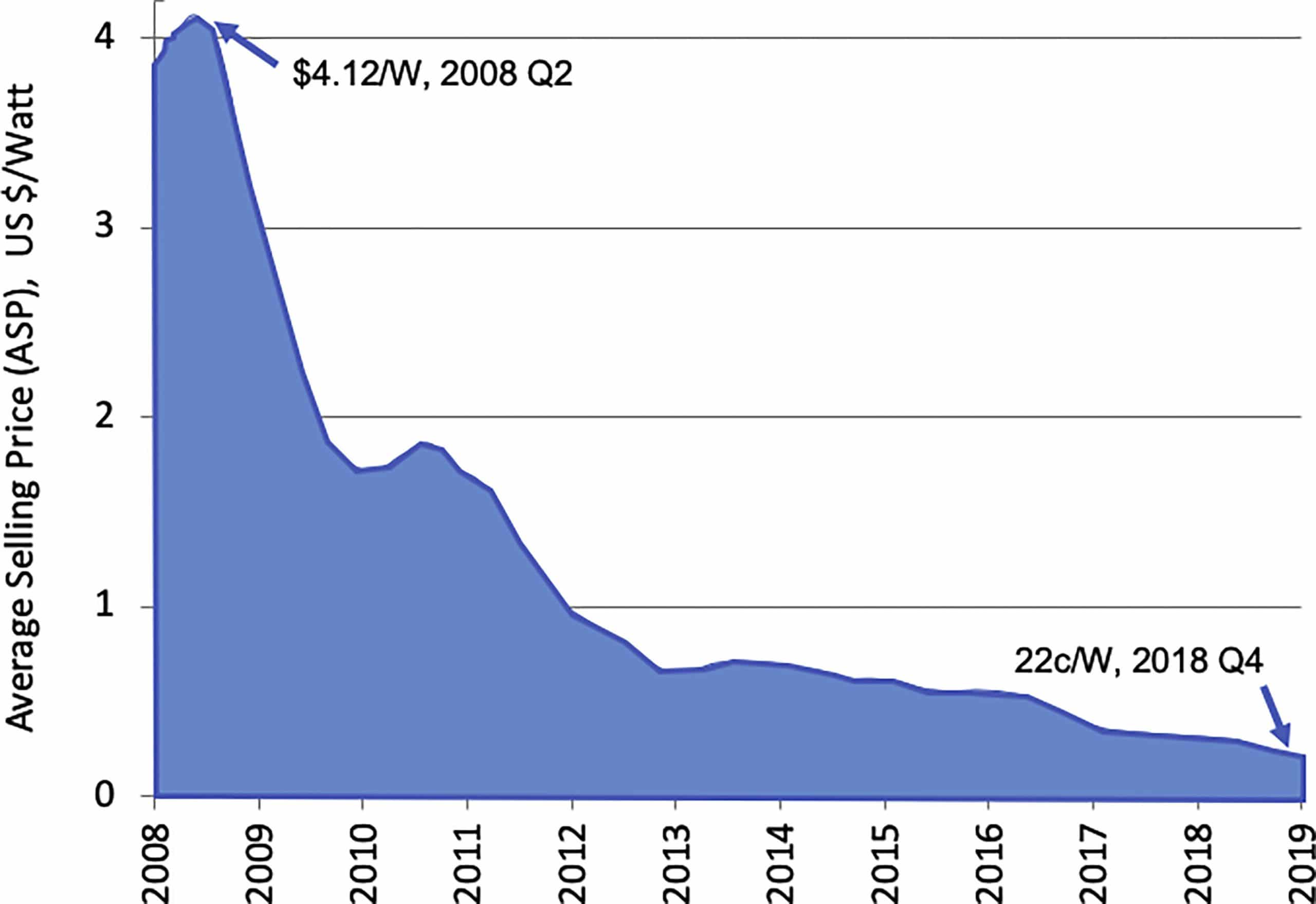 Image from "How Did Solar Cells Get So Cheap?" by Martin Green, Father of Photovoltaics

Electronic grade silicon is a common material in computer chips for all sectors of technology. Solar Silicon requires additional mechanical steps to produce which was a large investment for the initial manufacturers. As the industry began to expand in Australia and in the World, the market for solar silicon grew. Soon advancements in solar silicon found cheaper manufacturing techniques and greater performance for the silicon to capture sunlight over the same area. These factors caused a cascading drop in price to produce solar silicon in terms of wattage as illustrated in the image above. Clear drops in production began to rapidly fall in 2009-2010 and again in 2011-2013.

The coupling of the Renewable Energy Target with the dramatic price fall of solar silicon meant that installations become less of an altruistic choice and more of an economic decision. Installation prices fell, the payback periods for installation reduced and homes/business began to see the benefits of a smaller power bill.

Australia is home to one of several branches of the WINAICO Solar Enterprise. Our Parent Company, Win Win Precision Technology, has been a long-standing fabricator with silicon related products. Officially developing a solar module manufacturing division in 2008, Win Win Precision Technology established WINAICO to become an industrial manufacturer of quality solar cells.

Blair Pester started the Australian Operation of WINAICO in 2012 during the initial domestic rise of solar modules. The initial modules that Blair introduced in the Australian Market were 240-Watt Polycrystalline modules. The 14.5% efficiency module were a market-leading product at the time, beating some manufacturers product by 20-50 Watts of power. This module was also installed at the Desert Knowledge Australia Solar Center in 2012, which demonstrates consistently high-power generation even after 8 years. We still look at the performance of the system as a prime example of the long term performance from a WINAICO system.

Shortly after, the WST Series was developed and introduced into the Australian Market. Seen as a younger sibling of the WSP Series, The WST range reflected a more accessible product in the market and was quickly accepted by our trusted Partners.

In 2017, Blair also petitioned to change the company’s product warranty for all its solar products to 15 years. This was the longest product warranty for solar in Australia at the time and was quickly adopted by other solar manufacturers in the market. This move also exposed low-cost module manufacturers that could not guarantee their product and help set a level of quality in the industry that is maintained even today.

This year has seen some massive announcements for WINAICO. Our Product Warranty extension to 25-years in collaboration with the performance guarantee and complimentary insurance means our modules provide the greatest security in the market. We have recently begun to step into the split-cell technology with the announcement of the new Gemini Series. The new high-power WST series will provide up to 375 watts of electricity per module while the new WSP Series is adapting our patented drainage technology into a custom-designed product.

Since our inception, WINAICO has operated through a Trusted Installers Program ensuring all our modules are in the hands of installers that take the necessary care and diligence with installations. We are looking forward to what opportunities 2021 will bring us and our partners.

Fun Fact: Why are we called WINAICO?

The first part of our name of WINAICO is a homage to our parent company, Win Win Precision Technology. The remaining portion is derived from the Italian word for solar capture technology, ‘fotovoltaico’. Additionally, the word fotovoltaico (or photovoltaics in English) is a tribute to the Greek word ‘phos’ (meaning light) and the inventor of the battery, an Italian physicist named Alessandro Volta. 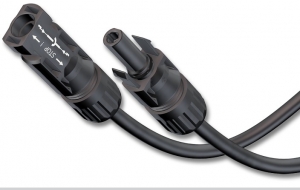 The new MC4 Evo2 connectors are on the Gemini Series. So the question for our installers is, are they compatible with the previous Genuine MC4 connectors? Yes. 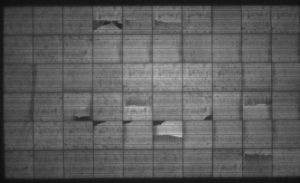 How Can Microcracks Damage Solar Panels

Learn about how microcracks damage solar panels and all the ways to prevent microcracks from degrading the energy production of your solar installation. 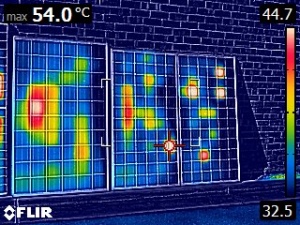 Finn from SolarQuotes and Blair deal some serious damage to solar modules to show how performance issues are usually undetected by the naked eye.